Three books in my Rose series:

In 1936, 16-year-old Rose runs away from her hometown of Crawford County , WI , to see some of the world before entering high school. Her journey via riverboat from Wisconsin to Missouri to Louisiana , from all-black sections of segregated towns to a house of ill repute, takes Rose through her first love and her eventual arrival at womanhood. Considering the setting, Rose is much more naive about race relations than she perhaps should be, but debut novelist Keleny details her journey and the myriad characters she encounters in an entertaining an enjoyable way. Narrator Adam Seeger uses his abundant vocal techniques to highlight the style of the times between the Great Depression and World War II. Recommended. [The self-published pb won a 2008 Independent Publisher Book Award and is only now available on audio; more at rosebloombook.com.—Ed.]—Terry Ann Lawler, Phoenix P.L.

“A soulful and lively writer. Rose is a female Huckleberry Finn.”

“A well-told and entertaining mutli-racial tale and coming-of-age story.”

A wonderful portrait of life on the river. The author develops her characters well and makes the reader care about them and their fates.”

The call of war can affect any American, regardless of gender. “A Burnished Rose” is a novel following Rose Krantz, an American woman who wanted a life more than a housewife, becoming a nurse out of the few options available to a woman in the 1940s. When Pearl Harbor is bombed, she rushes to join the war effort, and author Christine Keleny tells the story of this generation who rose to the call quickly and proudly. “A Burnished Rose” is an excellent work of World War II historical fiction, with a feminist message attached

Rose From the Ashes:

Shell shock, battle fatigue, post traumatic stress disorder―it all means the same thing to veterans who have served their country by putting themselves in harm’s way. But for women veterans of WWII like Rose Krantz, it also meant coming back to a country that, even during the war, hadn’t given them the rights that the lowest-ranking male soldier enjoyed, barely acknowledged the sacrifices they had all made, and, in some cases, chastised them for even participating.

So in 1945, when Rose came home to bury her husband only to find out she was pregnant with his child, her nightmares, her daily anxieties, and the two men who wanted to protect her, had to be put aside until Rose was finally forced to come to terms with it all.

Rose From the Ashes is the third and fitting end to the Rose series.

It is 1954 and Katherine Gale has just turned thirteen, though she likes it when people say she looks older. But no matter what year it is, when you’re thirteen, you still don’t like cleaning your room, having to sit next to your younger brothers, or go visit your elderly Grandmother. Katherine and her mother, Ruth, are about to do just that.

Grandma Blanch is eighty-four and getting forgetful, so it was decided she has to move soon and Ruth needs help sorting through Grandma’s things. Katherine only has younger brothers, so she gets volunteered for the task. What Katherine and her mother don’t know is that Grandma Blanch needs more help then they realize, and Katherine, unwittingly, discovers how to do just that. What Katherine doesn’t expect is that she gains a new friend in the process.

Living in the House of Drugs: 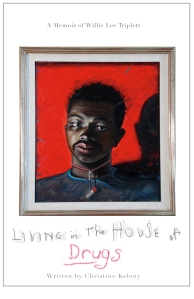 As a child in 1980s, Chicago Willie stole to help feed his brothers, sister, and himself. In grade school his teacher told him to have his parents help him with his homework, but his mother, the only parent around, didn’t know how. As a young man Willie started smoking pot, which easily turned into harder drugs. This eventually led Willie to a life under someone’s front porch, two prison sentences, numerous trips to jail, and various recovery programs.

Living in the House of Drugs is the story of Willie Lee Triplett, a recovering addict and alcoholic. It tells of Willie’s life in the suburbs of one of Chicago’s poorer neighborhoods, his chance trip to Wisconsin, and his struggle for sobriety. It’s a no-holds-barred account of Willie’s life on the street, in prison, and the roller coaster ride of recovery that many addicts know well. The story is unique in its telling, following not only Willie’s interesting life story but also the author’s interactions with Willie as she learns of his sometimes sorted past, seeing beyond the story and into the man.

Will the Real Carolyn Keene Please Stand Up 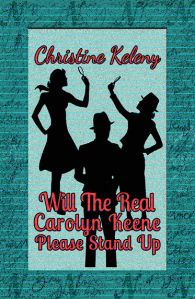 If you didn’t already know, Carolyn Keene, of the famous Nancy Drew mystery series, is not a real person. Neither is the Hardy Boys’ Franklin Dixon or Laura Lee Hope of the Bobbsey Twins. They are all the brain child of one of the country’s most prolific writers for children and young adults to date: Edward Stratemeyer. Edward was so prolific, in fact, that he had to eventually hire ghostwriters to help him flush out his story ideas, which was not an issue until a series he created just before his death became a cult classic.

“Will the Real Carolyn Keene Please Stand Up” tells of the lives of the three primary creators of the Nancy mystery series and how the plucky, intelligent, resourceful, and famous girl sleuth came to life, along with the controversy that still rages on about who really created the Nancy that millions of readers across the globe have come to know and love.

*Note: Teacher support material is available and Christine would love to visit your classroom, either in person or via an internet chat. Contact Christine at christinekeleny@yahoo.com

Intrigue in Istanbul: An Agnes Kelly Mystery Adventure (Book I) 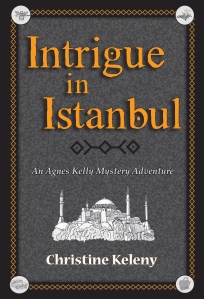 Everyone at the table is as surprised by Grandma’s little maneuver as I am, but I’m not looking at my relatives or even at Peggy, I’ve got my eyes glued on Grandma Agee. She’s reading Uncle Bob the riot act over at the dessert table…I’m concentrating hard on Grandma’s face, specifically her lips. But she’s turned ever so slightly away from me so I can only make out a bit of what she’s saying: “I told ya…” and “…button your lip” among the finger wagging and eye scowling she’s giving poor Uncle Bob.

With Grandma’s odd reaction and my dad being gone, unable to explain himself to me ever again, I feel an urgent need to find out what in the world he “got into” that Grandma Agee doesn’t want me to know about.

Book One of the Agnes Kelly Mystery Adventure Series will make you laugh, set you on the edge of your seat and leave you wanting more – both the older and younger reader alike.

Agnes Kelly, a girl growing up in the 1960s, is not unlike twelve-year-old girls of the 21st century. She is inquisitive, observant and thoughtful. Middle school readers will relish Intrigue in Istanbul-An Agnes Kelly Mystery Adventure by Christine Keleny from start to finish. I know my middle school students will thoroughly enjoy Agnes’ exciting escapades and so will you.

*Note: Teacher support material is available and Christine would love to visit your classroom, either in person or via an internet chat. Contact Christine at christinekeleny@yahoo.com

Now Grandma Agee and I are a team, like Charlie Chan and his two kids (I can’t remember their names) or Sherlock Holmes and Dr. Watson. I’m really excited that she is going to keep looking for information about my dad and that Grandma wants me to help. So I’ve got to do what Mr. Morrison, our neighbor, always tells us kids: Carpe diem! Seize the day! …

So I’m on my way to Norway. I want to be able to tell my mom and my brothers what happened to my dad. It’s sinking in more and more that he’s really gone, and I think it would help all of us if we knew the truth. I know it would help me. But if I’m going to help Grandma find out what really happened, I need more information. And the person I need to talk to is sitting right beside me.

The laughs, thrills, and hijinks continue for young and old alike in Book II of the Agnes Kelly Mystery Adventure Series, the much-anticipated follow-up to the Award-Winning Intrigue in Istanbul. But there is more! Grandma and Agnes get in over their heads and end up putting their very lives at risk.

I enjoy books that make you think and are clever, so this one is perfect… Can’t wait for your next book.
Roxana Grunewald –  8th Grader

All is Revealed in Russia: An Agnes Kelly Mystery Adventure (Book III)

I turn to see where Grandma and Reggie are and run right into a brick wall. Well, it’s not exactly a brick wall but it feels like it. It’s a really big man in a dark suit and tie, who kind of reminds me of Officer Miller, the CIA officer that saved us from Georg and Inger when we were in Norway.

“Oh! I’m sorry.” I step to my right to move around the man, but he does something really strange; he steps back in front of me as if to block my way.

I look up at the big man with broad shoulders, and then it dawns on me: Officer Miller has sent a man to find us and make us finally go home!

Has Grandma Agee gone off the deep end with her new plan? Is there any chance Grandma and Agnes can meet with Russian’s supreme leader, Nikita Khrushchev? Is CIA Officer Miller or Mr. Borge of EI4 (the Norwegian Intelligence Service) going to catch up to them and force them to go home?

Book III in the Agnes Kelly Mystery Adventure Series is full of even more surprises, takes you on another exciting ride (this time through the heart of Russia), and Reveals All! − including some things you would never expect! 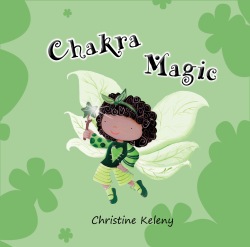 The Chakra Fairies have a gift for you!

The seven chakra fairies in Chakra Magic have come together just for you to share some important information that will help you every day of your life.

What you will learn in Chakra Magic:
• the energy centers in the body have been a part of many cultures for a very long time.
• the color associated with each chakra.
• what the energy in each chakra can affect in your life every day.
• multiple ways to help balance your own chakras to help them work better.

Included is a simple, step-by-step meditation to help your chakras work better. And as an Added Bonus – Christine has included an exercise you can do to learn to actually feel your own energy. You can do this on your own or with a friend or family member.

Error: Twitter did not respond. Please wait a few minutes and refresh this page.